Here is a denticle that I was not expecting to find. It belongs to a shark that I only on second thought included in my denticle reference collection, one that ought not belong on a coral reef. This appears to be the denticle of a crocodile shark (Pseudocarcharias kamoharai). While denticles can normally only be identified at the family level, this one fails to resemble any other denticle in my reference collection… except one. It looks almost identical to those that I isolated from the skin of a verified crocodile shark at the Smithsonian National Museum of Natural History (image below), except that it is a little smaller and much more weathered.

Scanning electron microscope image of a denticle isolated from the body of a crocodile shark for inclusion in our reference collection. 185x magnification.

Not only are crocodile sharks unassociated with coral reefs – in fact they generally only ascend from the depths at night to feed – but this shark has not been documented in the region in which this denticle was found. What’s more amazing is that this denticle is not even modern. It was extracted from our  6,600-year-old fossil reef!

While you may have never heard of a crocodile shark, they are listed as ‘Near Threatened’ on the the International Union for Conservation of Nature (IUCN) Red List. We obviously need to learn more about this species of shark in order to better protect it.

Our finding suggests that crocodile sharks did occasionally venture onto the lagoonal reefs of Bocas del Toro, Panama in the past (and perhaps even in the present day as well). More importantly, to me, this denticle epitomizes the beauty of the technique. Extracting and analyzing dermal denticle assemblages can reveal the rare, cryptic, or ephemeral elasmobranch visitors on reefs, an otherwise very challenging task to accomplish. 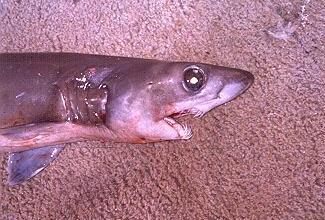