As a part of an Art and Sciences course I took this past spring quarter at UC Santa Barbara, I learned about THEMAS, practiced making digital art, and created a 3D sculpture made of shark denticles.

So what exactly is THEMAS? THEMAS stands for Technology, Humanities, Engineering, Mathematics, Art, and Science. Throughout the course, we explored topics ranging from how helicopters work to the thoughts of Greek philosophers. We were encouraged to make things and learn how to ‘swim’ by engaging with these works. I entered this class wondering how the Arts and Sciences were connected, and I came to realize how highly interconnected all these themes are. For the final project, we were challenged to create a mediated world encompassing THEMAS, based on a subject and artistic media of our choice.

Inspired by this final assignment, I took the initiative to learn a new tool: 3D modeling. I began by trying different programs and chose Blender, an open-source 3D modeling program. Blender is very versatile and offers basic to advanced features for modeling. However, one can start with a template shape and use the 3D grid space to place vertices in order to build any shape one can imagine.

At the same time as taking the class, I was also working with the Baseline Caribbean team on a research project involving shark dermal denticles. I realized that this would be a great opportunity to showcase shark denticles in the form of a 3D sculpture. The relationship between denticle morphology and the functional properties of shark denticles is quite fascinating. Inspired by how different groups of denticles are arranged on the skin, I decided to model several basic denticle morphotypes and create an artistic piece that would bring awareness of denticles and their intriguing diversity of forms to the public.

Learning how to work in 3D space was a challenge at first, as there were many different shortcuts to create new vertices and edges. I gradually got the hang of creating the denticle base first, then the crown.

I then layered these denticles in 3D space, shifting the angle of the denticles ever so slightly and recreating a motion that is similar to a wave in the ocean.

Here is the finished 3D sculpture:

This is a mediated world, as it draws from elements of both reality and fiction. I created the shark denticles based on actual denticle morphology and arrangement patterns on the skin but used fictional sizes and colors to create an artistic composition. I’m glad that this class gave me the motivation to create an informed piece like this and for revealing to me more connections between Art and Science. 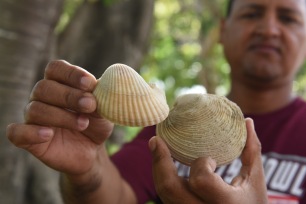 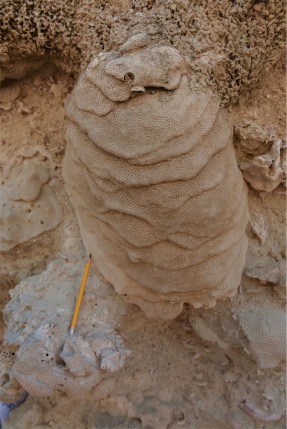 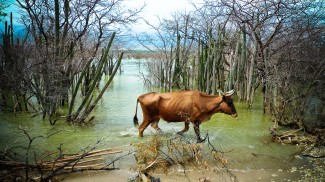