Half of our proposed sampling sites were located in the lagoon. These words may strike fear in the hearts of some of the researchers who have dove in the lagoon before and seen large shadows lurking in the murky depths or fended off tiger sharks. At least these are the stories that people told me before my first lagoon dive. I wish they had told me after. You can throw rocks off the wharf into the lagoon and the sharks and giant trevally will come… and not just blacktip reef sharks, which I don’t mind hanging out with. There are tigers, lemons, grays, and potentially hammerheads that patrol the lagoon. The scariest part is that the visibility is so bad in some areas that you would barely be able to see them coming.

However, the sediment here is soft and silty (which further lowers the visibility when you dig into it and kick up a swirling cloud of silt). A mix of live and dead coral can be found where the lagoon flat slopes down into the lagoon proper, and there are some shallower patches toward the center of the lagoon. This is where we sampled.

Our first dive was in the West Lagoon, almost directly opposite the research station. We descended about 20ft along the slope before kneeling on the sandy bottom to start our work. Because of the incline, it was easier to kneel with my back to the lagoon. About halfway through each sample, I would nervously look back over my shoulder to make sure nothing big was there. And fortunately nothing ever was… at least on this dive. 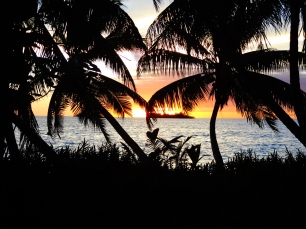 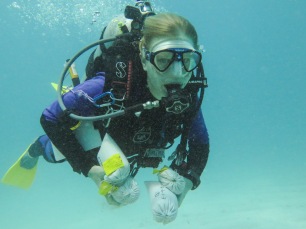