Our story begins at a place called Penguin Spit, a reef located outside of the lagoon just south of the channel (lower left hand corner of the map). This is a commonly accessed reef on the atoll and the site of our first sediment collection. Situated safely behind the reef crest, this area is protected from much of the wave energy that batters the forereef. These waves and swell become abundantly obvious as you move offshore from the channel, and our tiny lagoon boats are only allowed with the boundary of the reef terrace for that very reason. The lower wave energy at Penguin Spit also means that there will be finer sediments that we can sample. Today, we were moored at Penguin Spit Middle, but later in the week we’ll head to Penguin Spit Inner as well, where the sediment is even siltier. 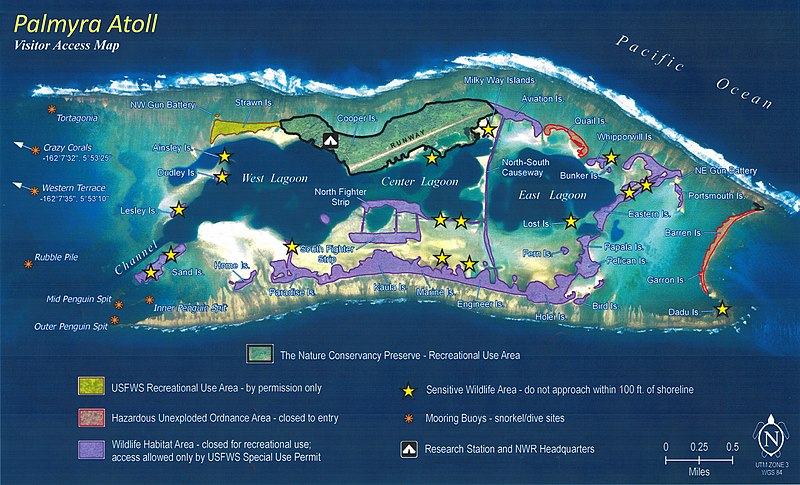 Sliding into the water from the boat, I was surrounded by a colorful mosaic of corals. The diversity and density were astounding! There were thousands upon thousands of corals. The coral cover for much of the reef was 100% or close to it, leaving us a just few patches of sediment to sample. My dive buddy, Dana, and I perused our surroundings, keeping an eye our for suitable patches of sediment and marveling at the hustle and bustle of the underwater city that surrounded us. Coralline bommies towered overhead and highways of convict tang and juvenile parrotfish cruised by. We later accompanied the person who wrote the narration for March of the Penguins here, and his first impression was one of pure astonishment. This place can really take your breath away.

However, even on this remote reef, there is a pernicious intruder. Thought to have first been introduced by the shipwreck of a long line vessel on the reef terrace north of the channel in 1991, corallimorph (Rhodactis howesii) has crept across the reef, displacing other corals. Even after the removal of the wreck, it continues to spread, leaving scientists scratching their heads. Efforts are in the works to try to curb corallimorph growth, which otherwise could threaten the dominance of corals on these reefs. In the picture below, it is the anemone-like organism crowding out the sediment patch that we sampled.