Samaná under the waves

After three days of sampling in Samaná Bay, it’s time to pack up and head back to Santo Domingo with another 90 sediment samples. It was neat to see the differences between the fossil reefs of the Enriquillo Valley and their modern counterparts in Samaná, a bay with a similar form and comparable sheltered fringing reef environment.

While one of our study sites was home to a large thicket of living staghorn coral (Acropora cervicornis), most of the reefs we visited were devoid of this IUCN critically endangered species. All that remained were eroded fragments of their branches covered in algae and encrusting organisms. Instead, algae, sponges, the occasional coral head, soft coral, or gorgonian (sea fan) populated the sandy bottom. Starfish and urchins patrolled the substrate, but we saw few fish.

In contrast, fish were much more abundant at the reef with healthy staghorn coral. We spotted small parrotfish, wrasses, surgeonfish, lizardfish, and territorial damselfish tending their algal gardens amongst the branches of the staghorn coral. We even saw an octopus crawling along a crevice between coral heads. In this shallow habitat, we collected sediment between the living staghorn colonies or in areas containing its rubble. While we encountered large waves and wind during our visit, the bay is normally more quiet. As such, we found the sediment to be fine and silty — exactly what we were looking for.

Deeper on the reefs, the corals were more densely distributed than I had originally expected them to be. As on the fossil reefs, we collected sediment samples between the thickets of coral heads, including brain coral (Diploria), star coral (Orbicella), lettuce coral (Agaricia), and starlet coral (Siderastrea). We even observed some of the same coral species that we had identified a week earlier on the fossil reefs.

While our qualitative observations suggest differences between the mid-Holocene and modern reef communities, the next step is processing the sediment we collected to characterize the microfossils left behind by the inhabitants of these reefs — both common and cryptic. Now we just need to get the samples back to Panama! 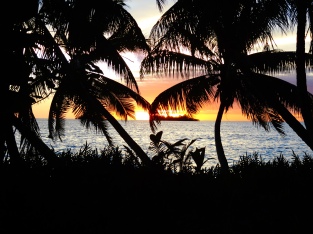